In the series “Beginner’s mind” Mariana Romagnani shares her experience of going through Dynamic Mindfulness Foundational Yoga Teacher Training during a pandemic. 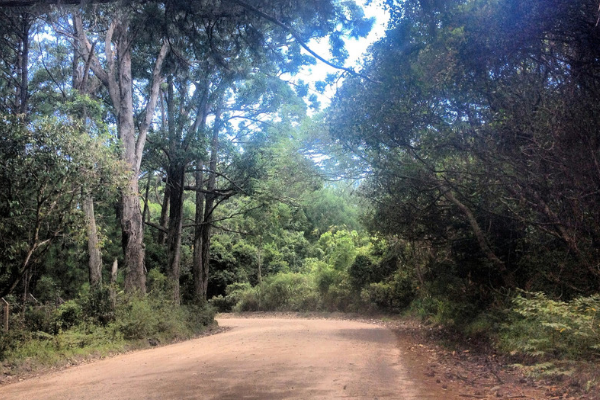 In the ancient concept of the ‘classical elements’, earth, water, fire and air are said to be essential parts and principles that everything consists of. In Buddhist texts, those elements are interpreted as constantly arising interdependently and are referred to as Mahabhuta (the great elements). To observe them, we should get in contact with them and with how they can be sensed, felt and perceived in and out of the body. The Dynamic Mindfulness Yoga Teacher Training borrows the aspects of the Mahabhuta as a guideline to structure the steps of its progression. It starts with the Earth Module. In the material and symbolic spheres, we can think of the element Earth as our concrete and tacit ground. It has an aspect of foundation, it can be experienced as solidity and hardness, and relates to the qualities of what is graspable, heavy and gross. So we know we have something at hand.

An often beaten pathway creates a clear flattened surface of the ground, making it easier to follow and to look forward. However, a too even pathway keeps the soil dry and the water that would nourish things to grow on the way, does not infiltrate easily, making possible for it to become slippery. In a similar manner, habits make things flow easier than it seemed before that behavior pattern was established, opening a way for transformations to smoothly happen. Nevertheless, it can create all sorts of blind spots and automatisms. A habit can become unnoticed as a habit. They often feel so natural that simply embracing them without awareness, without questioning, makes us prone to forgetting that there are so many other ways for things to unfold.

In the first module of the Foundational Yoga Teacher Training we come to face where we stand right now with our yoga practices and with our lives, and start to allow ourselves to scramble the soil of our singular journey, the ground in which we stand. In doing so, our habits, assumed truths, lenses of reality, yoga practice and perspectives are set in motion.

Beginning with a full dive into the history and philosophy of Yoga and Buddhist Yoga, we envisage how these ancient teachings and practices can be relevant in the context of our contemporary lives. If we can only recognize a pathway because it has already been walked by someone else before. While we enter it, we check our ground of existence – time and space – and reflect on the singularity of our practices as snapshots of specific social-cultural realities. We adhere to the exercise of recognizing our own part in the development of a tradition: At the same time, honouring and respecting the heritage and the teachings that came through long processes and transformations until it could reach us; and being open for valuing the contribution we can genuinely bring through with our own personal experiences, experimentation and inspiration. What value would there be in following any practice, neglecting these fundamental quests and without coming to realize the part we stand in a broader context of globalized interaction of ideas?

Dynamic Mindfulness is a contemporary non-dogmatic yoga approach with a focus on practicing mindfulness in movement and stillness. With Buddha’s teachings as its solid ground, it steemes for the middle path in the practice, meaning that instead of pushing the body to extremes and to ever greater challenges, it asks nothing but for the constant balance between effort and ease and self-agency (not allowing anyone else to be tutorial of your body or outsourcing the responsibilities within your own limits). A gentle and democratic approach, biomechanically well informed for a safe long-lasting practice.

In beginning this Yoga teacher training, one of the issues which has become most present (at least for me) is coming to terms with all the differences that might be between our own yoga practice and the practice of yoga teaching (or guidance). What, why and how are big matters to deal with and call us to continuously check the coherence between purposes and approaches, contexts and manners. Asking for a sincere response to the ways we are present in society and in people’s lives with the sharing of our knowledge.

People may go to a yoga class for all sorts of reasons. In the same way, many can be our own reasons and purposes with yoga practice and with choosing to teach. If we make the exercise of thinking ourselves as humus, in which ways would we like to nurture ourselves and others? In which ways can we offer a  generous space that allows for the embrace of inner inquiry, inward attention, connection, and self-awareness? And not simply place just another demand for self-improvement, in a society already overloaded with demands for everyone to be better, faster, higher (or stronger and stretchy).

As some of us in the group are also looking for professionalization, different labor opportunities and career paths, we keep in mind that, when it comes to yoga, all this has more to do with offering a context for people to care and nourish their singular journeys than with offering a service or product.  We wonder about the future with the support of where we step at the present moment. After all, does it matter where we are heading to if we are not aware of where we are now? No planting will work if we only focus on the result we want and aim for, without paying attention to how each moment brings transformations to the whole process, slowly forming what will be presented later. Checking in to the present also means realizing what we are being fertile to and seeing what we are cultivating within ourselves. As we engage with it, something new starts to sprout.