In the following series of blog posts, I will attempt to summarize my research on the history of Hindu Modern Yoga, engraved around three figures: Sri Tirumalai Krishnamacharya, Sri K. Pattabhi Jois & Sri B.K.S. Iyengar, summarizing their life, teachings and controversies evolved over time.

To start with, let’s look into the mystic chronology of Krishnamacharya life events.

Sri T.Krishnamacharya was born on 18th November 1888 in Muchkundapuram (200 km northwest of Mysore) in Karnatka state in orthodox Brahmin family. He belonged to Tirumalai family and his father Tirumalai Srinivasa Tatachary and his mother Ranganayakamma were both devout Sri Vaishnavas. Krishnamacharya hailed from a family of scholars and priests.

Krishnamacharya was the first of six children and was tutored by his own father. Srinivasa Tatachary knowledged him in Vedas and other religious texts in traditional gurukul manner. In those days, teachers were known to be strict with their students and follow the traditional regimen of gurukul system.

As mentioned in “The Yoga of the Yogi- The Legacy of T. Krishnamacharya”, Krishnamacharya father used to wake up his students at 2 am to chat Vedas and practice asanas, repetition method is followed until the students can recite it without mistakes. The main motto was to practice until you attain perfection in your doings. Krishnamacharya nature of strictness in his teachings could be a result of his upbringing in traditional gurukul system

Krishnamacharya father died at the age of 10 and afterward family moved to Mysore. At the age 12, Krishnamacharya joined parakala mutt, at that time grandfather of Krishnamacharya was Pontiff of Parakala Mutt. Under his teachings, he attained education on Vedanta, Vyakarna (Sanskrit Grammar), and Tarka (logic)

Parakala Matha/Mutt is a Vaishnava monastery (matha) established in Karnataka. It was the first medieval era monastery of the Vadakalai denomination within Vaishnavism (followers of Lord Vishnu) tradition of Hindu society.

A tale goes like this: when Krishnamacharya was just sixteen years old, he had a strange dream of his ancestor Nathmuni directing him to visit a small town in Tamilnadhu known as Alvar Triunagri in a quest to attain knowledge on Yoga Rahasya (Secrets of Yoga).

A little boy driven by his dream traveled all way to the destination. There he met an old man who guided him to walk in a particular direction, and soon he found himself in a state of trance, surrounded by mango groves and three sages. One of them was Nathamuni, and then they all together recited the verses in their magical voice. And soon he realized, there are no sages around, but he remembered all their narrated verses. He ran behind to meet an old man, and an old man smiled that he is blessed by the knowledge of Yoga Rahysya.

According to the reference in  Mark Singleton’s “Yoga Body – The Origins of Modern Posture Practice”, his son Desikachar; and research by other scholars reveal that so-called claim of Krishnamacharya to have “channeled” the Yoga Rahasya at the age of sixteen when he met an incarnation of the 1200-year-old saint Nathamuni is not completely true as Yoga Rahasya seems to be modern work. Although Krishnamacharya seems to offer a half-confession of this in his prelude, where he says, “I construct the essence of Yoga Rahasya to please the learned . . . I present here whatever I can recollect. 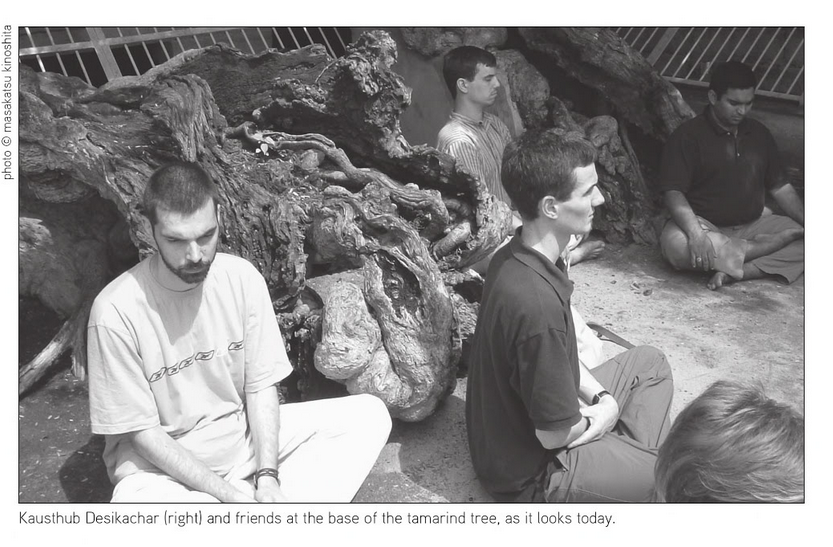 As claimed by his biographies, 18-year old Krishnamacharya, in the course of educating himself spent 10 years of his life at places in Benares, Bihar and Mysore, where he mastered the major darsanas (philosophies) and tarka (logic). He learned vyakarana (Sanskrit grammar) from Brahmashri Shivakumar Shastry.

In his book “Health, healing and beyond – yoga and the living tradition of T. Krishnamacharya”, Desikachar mentioned mystifying remark in his father’s autobiography:”… within one night (Brahmashri Shivakumar Shastry ) taught me rare and secret aspects of Sanskrit grammar. But he lost his speech the following day.”

Why Krishnamacharya would have chosen to leave for Patna and Tibet to enhance his knowledge of Yoga philosophy when one of the greatest Indian scholars on the subject was his Varanasi friend and mentor Ganganath Jha?

1997, 1998, and 2005 Desikachar biographies place him in Benaras between 1906 and 1909, and then again between 1914 and 1915 (or 1914 and 1917, followed by seven years in Tibet). None of these dates permits an encounter of any sort—let alone a strong bond of friendship to have developed— between Krishnamacharya and Jha at any time between 1906 and 1918. Moreover as per the archives from Queen College, Muralidhara Jha, whose official title was “Vice Principal of Sanskrit Queen College” rather than “Ganganath Jha”.Jha was, from 1902 to 1918, professor of Sanskrit at Muir College in Allahabad and did not arrive in Benaras until 1918

Another chronological problem in Krishnamacharya’s academic itinerary concerns Patna University, according to reference “The Strange Case of Krishnamacharya”White, David Gordon: The Yoga Sutra of Patanjali – A Biography. The chapter “The Strange Case of Krishnamacharya” is essential reading for understanding the construction of his persona and work, where he is said to have taken an examination in Samkhya-Yoga philosophy from an unnamed scholar. Patna University was not founded until 1917, and its first examinations not held until 1918

Year 1915 : Pilgrimage to the Himalayas

Krishnamacharya reportedly goes to Tibet’s Mt. Kailash for 7 years, according to reference -“Tamil Edition by Lakshmi and Nandini Ranganathan: Yoga Makarkansa 1– A Book on Āsana Practice written by T Krishnamacharya in 1934. Translated in 2006 from the 1938”, to study yoga therapy in the cave of the putatively 230-year-old, Ramamohana Brahmachari. Firstly he was taught precept of pranayama, lived on a fruit diet, continued his study for 7 years (1915-1922). Later, he learned yoga sutras Patanjali by heart and taught to determine the health of living being by measuring heart beat and pulse rate.

According to Krishnamacharya, saint knew 7000 asanas but he Krishnamacharya mastered 3000 asanas. Also, he admitted to studied Yoga Korunta—a Tibetan text on yoga healing—and side-tripping to Kabul, to Kashmir (for Sufism) and to Burma (for Buddhist yoga). When his tutelage ends, his guru tells him to marry and earn his living by yoga.

All of Krishnamacharya’s biographers locate Krishnamacharya’s Yoga master Ramamohana Brahmachari in a cave on the shore of Lake Manasarovar or at the foot of Mount Kailash in Tibet. Yet by Krishnamacharya’s own account, in his 1934 “Emerald of yoga (translated from Yoga Makarkanda 1)” his teacher, “who has mastered seven thousand asanas,” was not in Tibet, but rather “in Nepal, living in Muktinarayanakshetram.”Muktinarayana (also known as Muktinath) is the name of an important Vaishnava shrine situated in northern Nepal, more than two hundred miles away as the crow flies from the Tibetan Mount Kailash. It is difficult to imagine how Krishnamacharya could have made this trek over some of the most rugged terrain in the world. 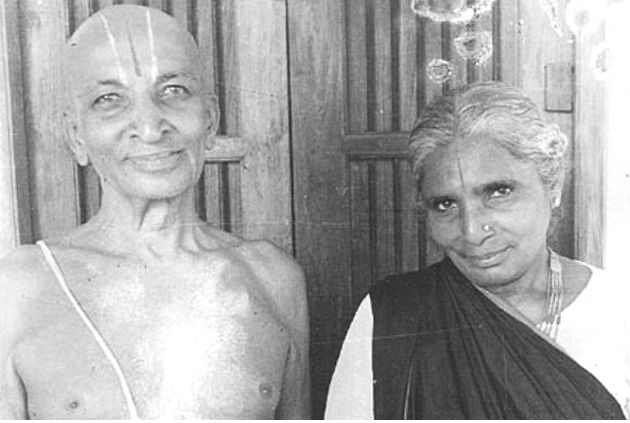 Picture courtesy of KYM Archives: Krishnamacharya with his wife

Maharaja was a sick man, he suffered from a host of ailments including diabetes and infertility and even the best doctors were not able to cure him (“reference-Desikachar, T. K. V., and Richard H. Cravens. : Health, healing and beyond – yoga and the living tradition of T. Krishnamacharya”). During his mother sixtieth birthday celebrations in Kasi, the Maharaja heard about Krishnamacharya healing skills. Later he invited Krishnamacharya for the demonstration in public auditorium in Jagmohan place, Mysore. 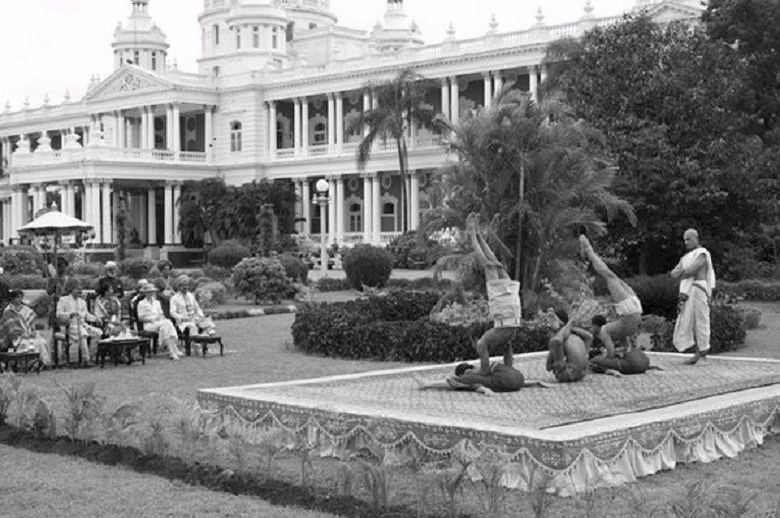 Further, he provided him space to open Yogashala, classes were open to all ages and from all walks of life. Krishnamacharya becomes physician and advisor to King of Mysore. He also becomes a father when his first child, a daughter, Pundarikavalli, is born during those years.

He wrote Makarkanda 1. It took him 7 days to finish the book. Krishnamacharya documents the purpose of yogabhyasa (the practice of yoga or abstract devotion) and why it is an important practice that influences the well being of the mind and body in his book Yoga Makaranda, which is one of many of his publications. He explains that it is the philosophy of yoga to draw the minds focus inwards to reach deep concentration to develop a form of mental strength. The benefit of this process is comparable to how sleep rejuvenates the mind, in which sleep is of a tamasic nature. The mental strength that is developed through yogabhyasa is called yoga nidra, and it by far exceeds the amount of strength and concentration that sleep or meditation may offer

Maharaja died in 1940 so does the heir interest in yoga. The family grew overtime, his teachings in Mysore came to end 1947 (also the year of India’s independence). During those years, Krishnamacharya lost his British clients and local people were struggling to meet the basic necessities & settle in free India, so there were not many students eager to study ancient texts & learn yoga. In 952, he was invited to relocate to Madras, by a well-known lawyer who sought Krishnamacharya’s help in healing from a stroke. By now, Krishnamacharya was in his sixties, and his reputation for being a strict and intimidating teacher had mellowed somewhat.

In Madras, Krishnamacharya accepted a job as a lecturer at Vivekananda College. He also began to acquire yoga students from diverse backgrounds and in various physical conditions, which required him to adapt his teaching to each student’s abilities. For the remainder of his teaching life, Krishnamacharya continued to refine this individualized approach, which came to be known as Viniyoga. Many considered Krishnamacharya a yoga master, but he continued to call himself a student because he felt that he was always “studying, exploring and experimenting” with the practice. Throughout his life, Krishnamacharya refused to take credit for his innovative teachings but instead attributed the knowledge to his guru or to ancient texts.

At the age of 96, Krishnamacharya fractured his hip. Refusing surgery, he treated himself and designed a course of practice that he could do in bed. Krishnamacharya lived and taught in Chennai until he slipped into a coma and died in 1989, at one hundred years of age. His cognitive faculties remained sharp until his death, and he continued to teach and heal whenever the situation arose.

Although his knowledge and teaching has influenced yoga throughout the world, Krishnamacharya never left his native India. It was mentioned in Yoga Journal site

You may never have heard of him but Krishnamacharya influenced or perhaps even invented your yoga. Whether you practice the dynamic series of Pattabhi Jois, the refined alignments of B. K. S. Iyengar, the classical postures of Indra Devi, or the customized vinyasa of Viniyoga, your practice stems from one source: a five-foot, two-inch Brahmin born more than one hundred years ago in a small South Indian village.

Nevertheless, the chronology of events in Krishnamacharya life still stays mystic, but we may not forget that his yoga journey & teachings brought in exquisite yoga work which is swallowed by generations and will be taken by next generations.

Perspectives on Mindfulness, Audio Lectures on Buddhism
Scroll to top